This book is primarily an aviation adventure story involving privately owned ex-military planes and a worldwide search for one in particular – an airworthy PBY-5A “Catalina” flying boat.

Catalina Dreaming is a 96-page soft cover book.  This is the second edition (the first, 1996, is now unavailable), which has been completely re-written, re-illustrated and updated.

This is a fascinating personal account of one man’s passion for classic ex-military planes – he had been a military pilot in his younger days – and his dream of getting a Catalina to New Zealand and flying it and sharing it with the public, Catalinas being very much a part of New Zealand’s aviation heritage.

The dream turned into somewhat of a nightmare and even finding a Catalina – let alone bringing it to New Zealand – was hugely ambitious and turned out to be full of uncertainty, drama and – initially – disaster.

The book includes a dramatic first-hand account of a night-time ditching of a Catalina and then its abandonment in the mid-Pacific Ocean.

But there is more human interest along the way and the book is dedicated to Ilama Dawe and Jacqui Bland, both of whom were cancer patients of the author (who was also a doctor in general medical practice); and both of whom had developed an interest in “the Catalina project”. The aircraft now raises donations for the Cancer Foundation as part of a “Flying in the Face of Cancer” project.

The book is well-illustrated and contains historical photos of military Catalinas as well as some of the other ex-military planes – Harvards and a Vampire jet (the author had flown them in the air force in his early days) – that he had since helped set up as privately owned ventures.

Be the first to review “Catalina Dreaming” Cancel reply 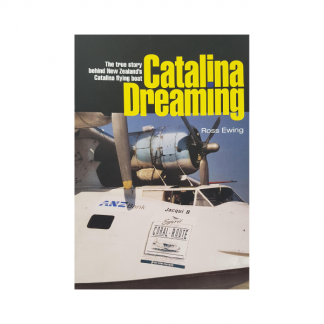