One Man’s War is a tale of one man’s experience from his early childhood and his reasons for becoming a pilot. He could have stayed in Britain as a reserved occupation and not left to fight. Of the many that fought, few of them got the recognition they deserved. This is one man’s story.

Bader, Tuck, Gibson, Lacey, Johnson – names that stand out when we think of the RAF in the Second World War. Courageous, daring, audacious, venerated in some cases, of high profile pilots that flew against the enemy but there were others who also should have held such accolades. The unsung, the unknown those that made up the bulk of the RAF in its fight against the German Luftwaffe.

They were the most vulnerable part of any formation when in action and accordingly suffered the higher casualties. Should any manage to achieve a victory over an opponent it was usually in the melee of battle, which followed the first attack. NCO pilots made up the bulk of this category who usually went unrecognised, unsung, and unrewarded.

Britain depended heavily on its RAF fighter force to keep the German Air Force from marauding at will the towns and countryside of Britain during the Second World War. Numerous aggressive sorties by fighter pilots at Squadron and wing strength kept the enemy at bay. This they did rather well in spite of their Spitfire Mk 5’s at the time being outclassed by the new Focke-Wulf 190, particularly in the 1942/43. Unfortunately causalities were rather high during this period.

I did not know this pilot personally but I knew many like him, undaunted by the pressures of war they did their jobs to the best of their ability. This pilot’s personal journey is like so many of those that died fighting for their country and those that were shot down and captured. Having to deal with the stress of captivity but having the fortitude after the war to rebuild their shattered lives. Britain and her Commonwealth of nations around the world should rightly regard him and his comrades as real heroes.

Be the first to review “One Man’s War” Cancel reply 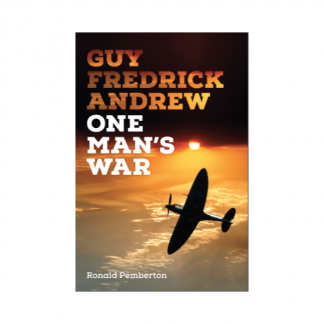