A biography, compiled and written by Ron Pemberton.

All young people dream but few thrust forward and turn their dreams into reality. From the age of four Trevor Thomas Bland never thought of anything else but flying. He read all the books he could find on aviation and throughout his youthful years he never lost sight of his goal. One dream is big enough to accomplish but two in a lifetime is a grand achievement. Trevor had three distinct careers in aviation, from his early days in the Royal New Zealand Air Force (RNZAF) flying Vampires and then Venoms in Singapore in the late 1950s, to moving to the RAF and flying the joy of his life, the Hawker Hunter with the RAF?s Blue Diamonds aerobatic flight. He then re-joined the RNZAF and flew B(I)12 Canberras and then A-4K Skyhawks, finishing his air force career. He then flew civilian Douglas DC-8s followed by Boeing 747 ‘jumbos’ and it was during this time that he started one of New Zealand’s iconic aviation preservation societies, the New Zealand Warbirds Association.

I was offered promotion and I could have gone on to Staff College but all I wanted to do was fly.

Many people have dreams of taking to the air but few carry that dream and make it a life’s work. Trevor Bland knew what he wanted from the age of four and that was to be a pilot. He realised his goal at the age of 15 and went on to become a world-renowned military pilot and preserver of our nation’s aviation history. Throughout his career he kept his sense of humour but, on occasions, that did get him into trouble.

During his second tour with the Royal New Zealand Air Force he took a clean A-4K Skyhawk (one without armaments or fuel drop-tanks) up to 40,000 ft and thought he’d ‘punch’ a sonic boom at Ohakea.

I rolled the aircraft over pointed it straight at the airfield and went Mach 1 (760 mph) and punched off a sonic boom but, unfortunately, I didn’t allow for the wind and the shock-wave hit the school. All the kids ran out screaming and I was in the brown stuff again.

3 reviews for Rags to Rivets – the Trevor Bland Story 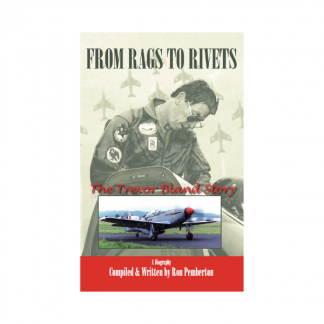