This has a colourful dust jacket, 152 pages, a foreword, prologue and epilogue.  It is in 13 chapters and has a bibliography, appendices and an index.  It measures 270 mm x 250 mm.

The book is written in a non-technical way and will appeal to the general reader and the aviation history specialist alike.

This is a very colourful hardcover “coffee table” style book and is basically about military planes, pilots, and politics.

It is generously illustrated and starts with a brief history of the Royal New Zealand Air Force air combat force dating back to World War 2, but then concentrates on the Douglas Skyhawk A-4K jet fighter, which became New Zealand’s air combat force until the force was completely disbanded – along with the Macchi jet training squadron – in 2001.

The Skyhawk was operated by RNZAF Squadron Numbers 75, 14 and 2, and it remained in service for over 30 years.

Chapters are devoted to how the decision to buy the Skyhawk was reached, and to how pilots were trained on the aircraft and became operational. The author was a jet flying instructor and was one of the initial pilot trainees sent to the USA to train on the A-4K with the US Navy.

He describes this training, getting the aircraft to New Zealand and setting up No 75 Squadron as New Zealand’s primary Skyhawk squadron and the air force training unit.

A boost in Skyhawk numbers in the mid 1980s (from the Royal Australian Navy) is covered, as is the substantial and innovative refurbishment and upgrading of all the aircraft (Project Kahu) to include state-of-the-art radar, navigation and weapons systems, and which included a head-up-display for the pilot.

The effect of changes in government policy in the mid-1980s, which led to a rift in the Anzus Treaty, are covered along with the subsequent direction taken up by the Skyhawks, including the sending of Number 2 Squadron Skyhawks to RAN Station Nowra in New South Wales to specialise in the anti-shipping role.  A further change of government policy, in 2001, led to the abrupt disbandment of the air combat force, and thus to the end of the Skyhawk era.

The book’s appendices include aircraft specifications and a list of all pilots who flew the New Zealand Skyhawks.

Be the first to review “Topped Gun” Cancel reply 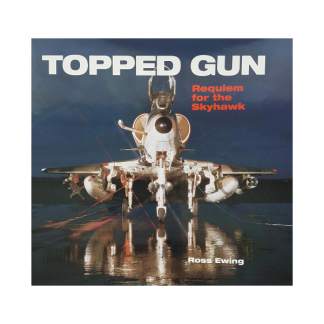